Is there a stink in the room that makes you recoil in disgust? Does it feel like you have tried everything to get rid of that smell only to have no success? Getting rid of a nasty smell can be an arduous task, and people often use the wrong product to do so. If you have a terrible odor in your room, let RecPro help you out with our Biocide Systems Room Shocker odor eliminator!

Our Biocide Systems odor eliminator helps you get rid of difficult odors fast. Other products say they eliminate odors, but that is usually not the case. Most other products will simply mask odors with perfumes or waxes, but the molecules causing the bad smell are still active. Once the fragrance wears off, the odor will return in full force. Our odor eliminator differs from this, as it genuinely does destroy odor-causing molecules and penetrates deeper than typical odor-masking products. It effectively removes odors from rooms up to 400 sq. feet and begins working within 24 hours.

The Room Shocker quick-release odor eliminator is a super strong solution to your odor problems. It can handle odors ranging from mild to severe! Chemical smells, cigarette smoke, and even odors from skunk sprays can all be dealt with quickly! The CLO2 molecules strongly bind to the odor-causing molecules and reach deep into every nook and cranny. It quickly oxidizes and destroys odors caused by organic molecules, such as cigarette smoke, while completely absorbing other types of stinky molecules.

This odor eliminator is not only safe to use; it is safe for the environment as well. As stated previously, the Biocide Systems Room Shocker Quick Release odor eliminator is non-toxic. It is also biodegradable, so you do not need to have any fear that this product will cause harm to the environment or wildlife once you dispose of it after use. It is also made here in the USA!

It is important to note that this odor eliminator does NOT clean any fabrics or surfaces. It is designed to clean the air only. Furthermore, while this odor eliminator can get rid of foul smells, the source of the smell must be removed as well, or the odor will eventually return. For example, if you have mold, then it is best that you get rid of the mold first before using the odor eliminator. If you are trying to clean the air of a room exposed to long-term smoking, you will also need to clean any fabrics or surfaces; otherwise, the odor will eventually return. Lastly, do not use this product below 50℉ or above 100℉, and do not use warm water to activate this product as it may cause an adverse chemical reaction.

To use the Biocide Systems Room Shocker, open it up and remove the contents. Remove the SIO2-DMG pouch and shake it before placing it back in the container. Place on a flat surface in a 400 sq. feet or less room without replacing the lid. Add cool water over the pouch to activate, close any windows, and wait for 24 hours. After waiting, open your windows for ventilation and replace the container lid and dispose of the container.

Get rid of the nasty smells and stench in your RV with ease thanks to our Biocide Systems Room Shocker! Use our website or have a chat with our friendly customer care team to get one (or a few) for yourself! If you have any questions you can give us a call or chat with us online! 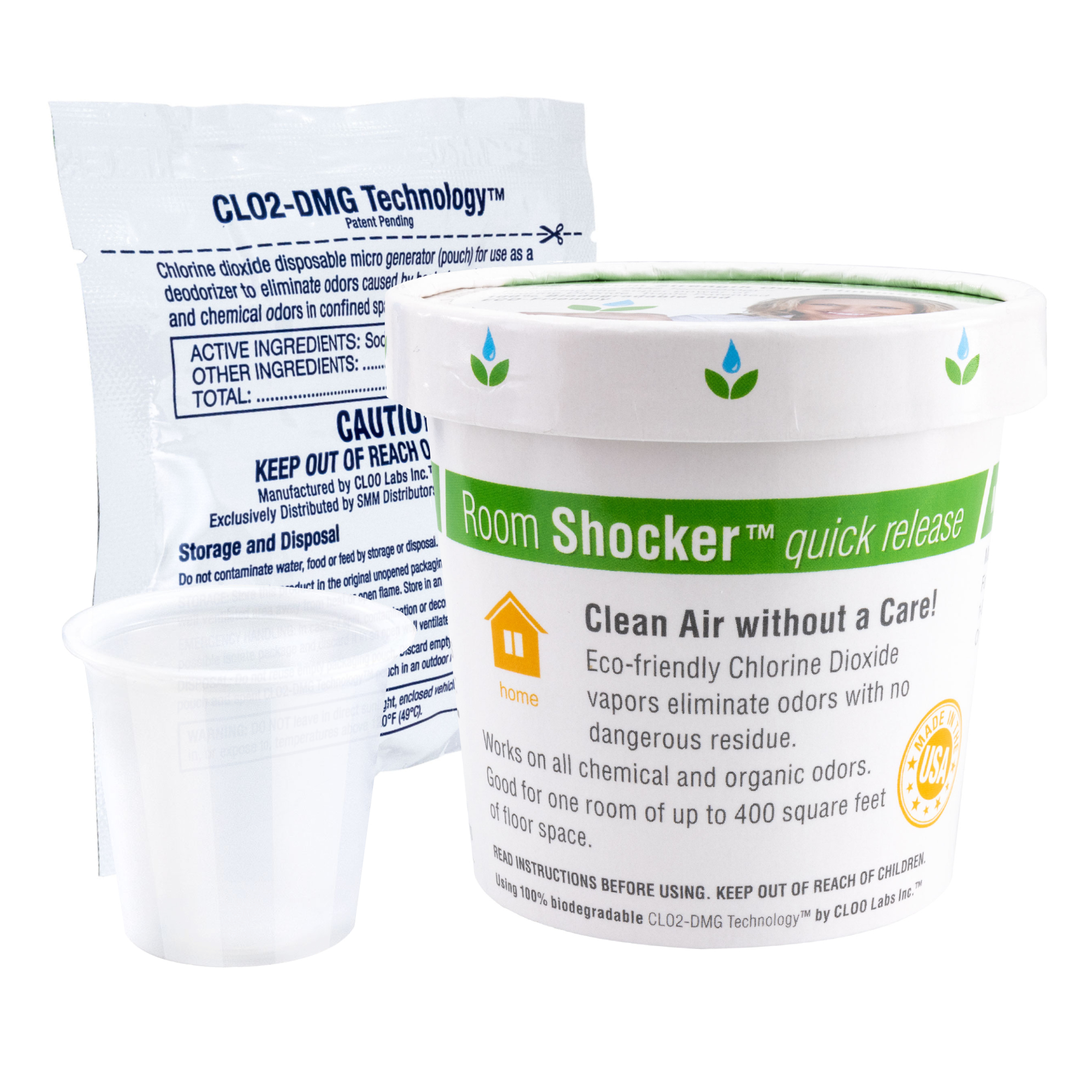 *Only cleans the air, does NOT clean fabrics
*The source of odors must be cleaned or removed, or the smell will return. I.e. if an odor is caused by mildew, the mildew must be cleaned as well.
*Long term smoking will require fabrics to be cleaned
*Break up before use
*Do not use below 50℉ or above 100℉